I do not normally blog directly from my heart, nor do I usually fill any of my social media profiles with my beliefs about politics, religion, or race … Honestly, I don’t feel I’m informed enough about any of those areas to put myself out there in a way that invites attack. However, the shooting yesterday of yet another innocent black man by an out of control police officer has hit home in a strange way.

Yesterday was my son’s 14th birthday, and as many young teens are wont to do, he is pushing every day for more freedom, fewer restrictions, more ability to stray from home without me. Like many parents, I worry incessantly over whether or not I should allow him to wander without me.

For his birthday, I posted a bunch of photos – wonderful, amusing snapshots of the creative, sometimes silly and often introspective child he was (amusing to me, anyway; for him some of them I’m certain are a horrible embarrassment). One of them, my favorite, I used as my “profile picture” on my personal Facebook page. It is the photo of the face of a handsome child intently studying a butterfly that is balanced on a leaf the child is pinching between his fingers. My son is a budding entomologist (though he prefers to be called an “insectologist”), with a special interest in ants.

My son also speaks, reads, and writes in Russian, and when he puts his mind to it can write a decent argumentative essay. He plays soccer, basketball, and this last season enjoyed being a member of the track team. He’s also a member of the science club, and part of his school’s self-described “nerd herd.” He’s an excellent artist with a mind bent towards architectural design (as I write this I can hear the Legos being shuffled around in his room). In addition, my son is polite (he opens doors for people, says “please” and “thank you,” and has passable table manners), is generally respectful of his elders, and is growing more and more thoughtful and helpful.

Yes, I am very, very proud of my son. He is growing to be a fine young man, and I have every reason to believe he will continue on this path, except for one thing …

My son is black.

Well, in reality, my son is mixed, because I am white and his father is black. But most of the time, I don’t think of him as anything except my son, Amadi. My son is a gorgeous caramel-colored boy with big, dark eyes, and soft, curly hair. This last year he’s grown taller than either of his parents by several inches, his voice has changed, and his little mustache is getting thicker. In other words, he’s just another kid, pretty typical for his age. 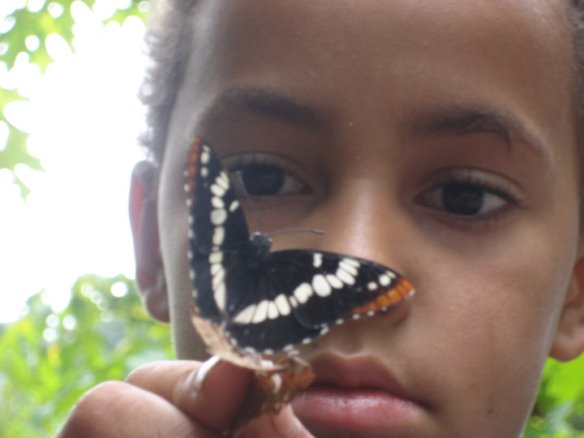 The photo I posted of him as my Facebook picture has been directly in front of me as I’ve read the accounts of Philando Castile’s death, watched the video of Ms. Reynold’s four-year-old child process the unimaginable, and read quotes from Philando’s mother. My heart hurts for all of the mothers out there, but especially for all of the mothers of black sons. Flashes of my beautiful little boy keep running through my mind, as I’m certain happens to every mother with every child.

My son noted recently that one of our neighbors has a “Police Lives Matter” bumper sticker on his truck. While this is certainly a true statement, just as the statement “all lives matter” is also true, not only is it fantastically dismissive of the point of the “Black Lives Matter” movement, it also misses a very crucial fact. Police officers have chosen a career that by its very nature puts them in harms way, that sometimes involves being shot at. Black people, on the other hand, have not chosen to be black, any more than white people have chosen to be white.

I am white, and I understand very well that because of that I enjoy some privileges, that I will never fully understand what it is to be part of the non-white races in America. I also happen to have been born predominantly straight and with genitalia that match my sense of self, was raised in the Christian faith (though I don’t follow it anymore), don’t have any real handicaps that make me stand out, and am in all other ways a pretty run-of-the-mill individual, non-threatening to the “powers that be.” So, I will never be able to fully understand what it’s like to be persecuted because of the way you were born.

I have seen and felt first-hand, however, the ugliness of racism directed at me and my loved ones (I won’t go into the many accounts of racism I’ve witnessed and felt here; perhaps another time). As a mother, I sympathize strongly with all the mothers who have lost their children for whatever reason … police brutality, violence, drugs, mental illness … How ever the loss occurs, it is an emptiness that will never be filled.

post-script addition: The day after I posted this, I was horrified to learn of the Dallas, Texas shooting of police officers who were doing exactly what they should have been doing. My heart goes out to them and their families. I hope we can learn from this tragedy and move forward together.